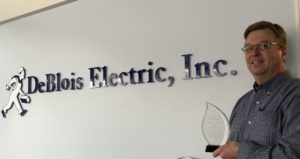 Mitch DeBlois, company president, is proud to be one of the 2019 recipients of the Flaming Arrow Award from Associated Builders and Contractors of Maine. The award is presented “to a stalwart defender of the Merit Shop, whose unrelenting commitment to free enterprise and fair competition has earned the respect and admiration of Maine’s construction industry.”

Mitch received the award because of testimony and support of LD 1639 in May 2019.  1639 is legislation requiring a project labor agreement on state funded projects in Maine. Other recipients are: